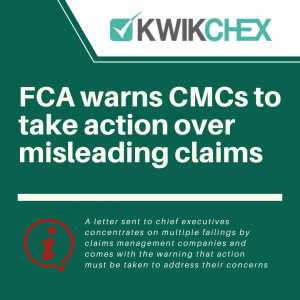 A letter sent to chief executives concentrates on multiple failings by claims management companies and comes with the warning that action must be taken to address their concerns; that often CMCs are willing to hand over poorly investigated cases with negligible chances of success.

Many CMCs have demonstrated a ‘poor understanding of, and sometimes attitude to, their regulatory obligations’, the letter states. ‘We expect CMCs to have a good understanding and regard to the requirements applying to them, take a pro-active approach to regulatory compliance and deal with the FCA in an open and co-operative way.‘If they fail to do so, we will consider whether they continue to meet our threshold conditions and comply with our rules. Any failure to do so may result in us using our supervisory or enforcement power.’The FCA identifies that some CMCs have been established by, or have close ties to, individuals previously involved in misconduct. There are cases, it is reported, where someone who was involved in the mis-selling of financial products is now profiting a second time from helping making claims against the firm where they worked. The FCA says it will refuse applications from CMCs where there is a conflict of interest.Other problems identified include misleading, unclear and unfair advertising, unclear fee structures, poor disclosure of pre-contractual information, and poor service standards.