Following a joint KwikChex  / BBC investigation, International takeaway food delivery giant Just Eat  has responded to concerns over food safety by announcing it will start to publish the official food hygiene rating of each of its UK restaurant partners directly on its platform both in-app and online.

The BBC News programme which was initiated and supported by a KwikChex investigations team led by Aria Maffei,  revealed the high number of UK  takeaways on the Just Eat site that had failed food hygiene checks.

KwikChex Co-founder, Chris Emmins, who appeared on the programme pushed hard for greater diligence, higher standards and more accurate online information – including asking Just Eat to check their partner hygiene ratings and publish the information prominently next to every business listing. Now Just Eat has announced it “will launch its trial of the initiative in Northern Ireland in early 2019 with over 600 restaurants. Following a full evaluation of the trial, a national roll-out will be implemented later in the year.” 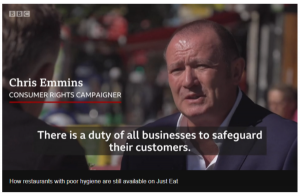 This is a good start to helping ensuring consumer safety by Just Eat – but we should not forget that this is an international business, operating in several countries – and consumer safety should be a priority in all. The UK has led the way with the Food Standards Agency publishing the results of hygiene inspections on businesses across the country, which provides consumers with an easy means of checking standards there. Given the results of the investigation in the UK, we believe that Just Eat should help lead the way in doing all possible to ensure that food safety is a priority in all of the countries they operate in.

You can view the news report  that broke the story of the investigation on the BBC website – https://www.bbc.co.uk/news/uk-45888709