All News/Blog, BBC, KwikChex In The Media, News

KwikChex celebrates 10 years of safeguarding with another appearance on BBC News and the removal of fake and malicious reviews from our client’s online profile.

KwikChex CEO and co-founder Chris Emmins has once again featured on the BBC, tackling fake online reviews – 10 years after our very first appearance.

In 2010, in our first year of operation, KwikChex starred in a BBC programme exposing the huge problem of fake online reviews. We have come a long way in that 10 years, expanding our safeguarding services to award-winning fraud-busting activities – but still the issues of review fraud persist. 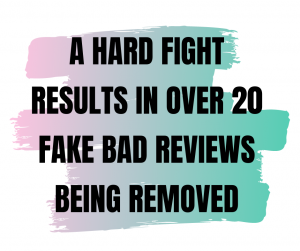 It was Google Reviews in the spotlight again, with KwikChex working on behalf of a client that had been maliciously attacked with multiple fake bad reviews. Despite the business owner being able to demonstrate the reviews were fake and using the resources Google provides to flag such abuses, he was told on multiple occasions by Google that the reviews did not contravene their guidelines, so they would not act to rectify a situation which threatened to destroy a business and lose people their livelihoods.

KwikChex assisted the business with multiple actions – fighting to get a criminal harassment case opened with the police, commencing defamation actions and having the abuse exposed on the BBC. The day after the defamation notice was sent to Google HQ and the same day as the BBC News item ran, Google reversed their position and removed all the fake bad reviews.

The KwikChex safeguarding revolution keeps on getting stronger

The efforts of KwikChex in tackling many internet-enabled dangers, including serious crimes have been featured over 30 times on the BBC alone. Hundreds of other stories and programmes around the world have also covered the unique value KwikChex has provided – and law enforcement, government departments and lawyers from several countries have also reached out to seek assistance from KwikChex.

Here are some of our notable achievements of the last 10 years:

· Thousands of fake positive and negative online reviews removed because of KwikChex actions.

· Businesses in many countries (we have assisted clients all over the globe, from Alaska to Australia) assisted in restoring reputations after false and malicious online attacks.

· Thousands of consumers seeking help over scams have had their cases resolved with the help of KwikChex, with many receiving refunds and compensation and others avoiding scams because of KwikChex advice.

· Testimony and appearances as witnesses in supporting civil and criminal actions against scammers have resulted in criminals being arrested and sentenced, and defrauded consumers getting their monies refunded.

· Given ‘Business Hero Award’ for our work providing free assistance to timeshare owners and for our expert support of law enforcement officers.

2020 has been a tough year and one where scam activities have risen exponentially. We have ramped up our safeguarding efforts and in 2021, KwikChex will be making even more resources available to safeguard consumers and businesses from internet-enabled harm.