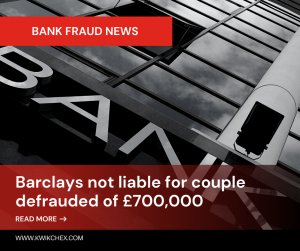 Despite promises of better safeguarding for bank customers, there are still many examples of people losing huge sums to such frauds.  KwikChex has recently been assisting a consumer that had paid £70,000 to a bogus investment business that was masquerading as another, registered business. We were able to stop further payments being made, including ones for fake ‘recovery services’ and the case for legitimate compensation is now ongoing. Consumers can use the free assistance provided by KwikChex to check any approaches made to them related to bank transactions, investment and trading ‘offers’.

“A bank does not need to compensate a customer who was duped into paying £700,000 to fraudsters, a judge ruled.

Fiona Philipp used her Barclays account to transfer two payments of £400,000 and £300,000 to accounts in the United Arab Emirates.

She and her doctor husband thought they were helping a high-profile fraud investigation being run by the Financial Conduct Authority (FCA).

The scam started when her husband was called by a man who claimed to work for the FCA.

He told him that his bank, HSBC, and an investment company he had savings in, were unsafe and at risk of fraud.

In order to keep the money safe, the conman said it had to be transferred into ‘safe accounts’ before his investigation could be completed.

He manipulated the couple to the extent that they allowed him to listen to meetings they had at the bank on an open line on the man’s mobile phone, a High Court judgement said.

Judge Russen QC said he felt ‘acute sympathy’ for the couple who had ‘fallen victim to the dishonesty’ of the fraudster but added ‘it would not be fair, just or reasonable to impose liability’ on the bank.

The court heard that the woman’s disclosure of security details to the fraudsters ‘involved clear breaches’ of the bank’s terms and conditions.

Alexia Knight, for Barclays, said it was ‘fanciful’ to think that the fraud would have been stopped if the bank had asked more ‘safeguarding questions’.”