On 10/02/22, KwikChex was featured in an article in the Mirror newspaper following a joint investigation on cryptocurrency reviews on the Trustpilot site.

View the full PDF of the Mirror article here

Or view text below – 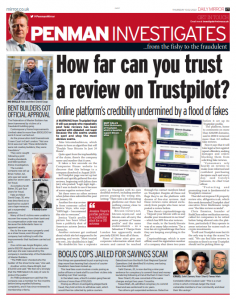 How far can you trust a review on Trustpilot?

Online platforms credibility undermined by a flood of fakes.

A warning from Trustpilot that it will sue people who repeatedly post fake reviews has been greeted with disbelief, not least because the site seems unable to spot and stop the most obvious scams.

Take bitcoindoubler.eu, which claims to have an algorithm that will “Double Your Bitcoin In Just 24 Hours”.

Quite apart from the implausibility of the claim, there’s the company name and number that it uses.

It takes a few seconds on the Companies House website to discover that this belongs to a company dissolved in August 2019.

Its Trustpilot page was set up last month and quickly gathered five-star reviews, beginning with Julian dave (sic), who posted: “Legit, legit, legit… first I was in doubt to use it because of some negative reviews here.”

Yet there were no other reviews when Julian dave submitted his post on January 18.

Another five-star review is from someone called Jessica Vayn, who says: “100% legit – I recommend this site to everyone.”

Jessica Vayn’s profile picture has been lifted from a publicity shot of American actress Jessica Camacho.

Another reviewer got confused about which site he’s supposed to be praising, and wrote: “Most trusted site ever…btc-doubler.biz is legit.”

Btc-doubler.biz has a separate entry on Trustpilot with its own doubtful reviews, including another person praising the wrong site, writing: “There were a lot of investing platforms out there but nothing comes close to Bitcoin Victory!”.

Bitcoin-victory.net, bitcoin-rejoin.net and bitcoin.com all carry the same promise of “insane profits” and the same endorsements – so a Sebastian T Thorpe from London has apparently made precisely £20,941 from all of them.

None of these sites give any corporate information about their owners and cannot be reached through the contact numbers listed on Trustpilot. Despite all these red flags they’re on the platform with dozens of five-star reviews. And these reviews come almost exclusively from people who have never posted a review before.

Then there’s cryptoarbitrage.vip – “Deposit your bitcoin with us and double your investment in no time!” – which has 90% five-star reviews. One reads, in the barely literate way of so many fake reviews: “I’m a true fan of cryptoarbitrage that how they are keeping everything in the flow.”

Cryptoarbitrage, which is now offline, used the registration number of a company shut down two years before it set up its Trustpilot profile.

Now it says that it will take legal action against repeat offenders, seeking damages and orders blocking them from soliciting fake reviews.

“ Protecting and promoting trust is fundamental to Trustpilot’s mission.”

Chris Emmins, founder of KwikChex online verification service, called for companies to be vetted before being allowed onto the platform, particularly if they operate in areas notorious for scams such as crypto investments.

“It will cost Trustpilot more but it’s the only way to stop the scams,” he said. “We can find fake reviews in minutes so there’s no way Trustpilot should not be picking them up.